LaBeach was an alternate member of the Helsinki golden quartet that included Olympians Arthur Wint, Herb McKenley, George Rhoden and Leslie Lanig that won gold in the men’s 4x400m final that gave Jamaica a historic victory in the event. He was also a semi-finalist in the 100 meters in the Helsinki Games. He later won gold medals for Jamaica at the Central American and Caribbean Games in Mexico City in 1954 with the 4×100 and 4×400 metres relay teams.

The celebrated Olympian who attended St. Georges College in Kingston was an outstanding varsity athlete at Morgan State University in Maryland from 1950 to 1954, following in the footsteps of his famous Olympian brothers, Lloyd and Sam LaBeach. In 1953, he won a silver medal in the 100 meters and a bronze medal in the 200 meters at the Central American Games.

Recently LaBeach, who resides in the tri-state area was the recipient of an Olympic Pin from president of the Jamaica Olympic Association (JOA), Christopher Samuda, at a service in Kingston that was attended by family, friends and other Olympians.

“We are extremely proud of your accomplishments and thank you for all you have done for brand Jamaica and for athletics.”

Mair announced that making the presentation to LaBeach, will be Olympian Devon ‘Oly’ Harris, a founding members of the Jamaica national bobsled team, who competed in the 1988, 1992 and 1998 Winter Olympics. During the 2018 Winter Olympic Games in PyeongChang, he was inducted as an ‘Olympian For Life’ by the World Olympians Association, in recognition of his contribution to society. 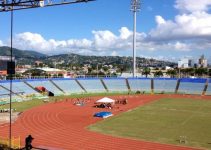