Prime Minister Mia Amor Mottley believes countries making up the United Nations need to pause for a moment and think deeply on where they need to go and what must be done to get there.

Ms. Mottley shared this view recently as she addressed a High-Level Meeting of the General Assembly to commemorate the 75th Anniversary of the United Nations. She said the community of nations must “think, consult and then be prepared to act”.

The Prime Minister opined that the world was again on the brink of devastation with the COVID-19 pandemic and the threat of climate change. “COVID-19 has manifested into a “perfect storm” that threatens to disrupt, and even reverse the development gains the global community has achieved in 75 years of sustained cooperative effort.

“It has undoubtedly derailed what limited progress developing states had been able to, or were positioning themselves to make, in implementing the 2030 Agenda, and has jeopardised our ability to meet the sustainable development goals within the final 10-year implementation window. Above all, it has exacted a horrific toll on millions of families worldwide and has already cost close to a million lives,” said Mottley.

She said the levels of unemployment were higher than they had been in decades, adding that countries faced the calamitous prospects of entering into an extended period of global economic depression.

“Inequality within and between countries is growing at a tremendous pace. The inherent vulnerabilities of small island developing states like my own have been exposed in vivid detail,” she pointed out.

Mottley said if COVID-19 had a silver lining, then it must be the unique opportunity the crisis gave to re-imagine all of the existing development paradigms of the wider United Nations system and to devise innovative policies for new and unprecedented times.

She recalled that financing was found in the form of a Marshall Plan for the rebuilding of Europe, and financial space was given to war-indebted Britain for over 50 years through bilateral loans and lines of credit at low-interest rates.

“Surely reconstruction of the COVID-shattered economies of our countries is a priority now…. Surely it is not beyond the international community’s capacity to develop mechanisms to ring-fence and differentiate COVID-related debt and to treat to it with the far-sighted realism that was shown then!

“In the absence of such an approach, it is clear that debt to GDP will be unsustainable for developing countries and there will be no fiscal room to build resilience as we stand on the frontline of the climate crisis,” the Prime Minister stated.

Mottley said small island developing states now had to re-engineer their nation-building in an increasingly unstable and uncertain world. She added that inherent vulnerability to circumstances not caused by them was keeping the countries on edge and fighting to survive. 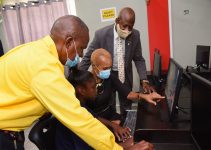