Prime Minister Mia Amor Mottley has told the global community that this is not the time to close ranks and be insular, but rather to work together to rebuild economies and societies.

Mottley made the comments yesterday as she delivered the feature address during the online ILO Global Summit on COVID-19 and the World of Work – Building a Better Future of Work, on Global Leaders’ Day.

The Prime Minister told her audience: “In the mad scramble for survival, there is the possibility that persons will be consumed with their own survival or worse, an insensitivity as to the plight of others. We need to continually remind all that we are all in this together …

“This is not the time for closing of ranks and insularity or a determination that only the strong will survive. Now, more than ever, countries have to collaborate closely if we will be successful in our efforts to rebuild our economies and our societies. Robust multilateral and bilateral cooperation and strong support by those in the international community must be given to the most vulnerable countries if they are expected to recover.”

At the domestic level, Mottley explained that training, retraining, and retooling of human resources must also be encouraged. She pointed out that the building of capacity through expanded capital works would create jobs in the short term.

“The digitization of our records and our systems and the transition even to a cashless economy are all critical and possible steps we should be looking at taking while our countries endure this major economic contraction,” she noted.

She said unions were confronting battles they thought they had won and settled decades ago. She expressed the view that the panic driven by the “feverish desire” to survive must not be allowed to take hold, such that there was no consideration for how to create a space for burden sharing that was fair.

She noted that the principle of burden sharing had served Barbados well, and described it as people centred development that was intended to lift as many citizens as possible to higher levels.

The lessons learnt from this global pandemic, Mottley suggested, must be documented, particularly those that affected the working populations, whether in the formal or informal sectors.

She added that as restrictions were lifted, the health and safety protocols which were adhered to during lockdowns must be followed. 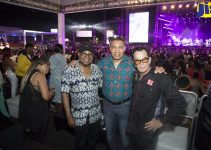