Wayne Foster aka Brother Wonder is a gospel artiste on a mission for God. Unlike most singers who claim to have a passion for music and knew from early they wanted to be in that industry – it is a different story for him.

Brother Wonder who started off in the early years as a selector said he just pushed music – he was too shy to ‘chat on the mic’ or MC.

Two years ago his wife Kadijah Hanson-Foster got baptized and two weeks later the gospel singer says he came under conviction from the Holy Spirit leading to his taking his watery baptism as well.

Seven months ago Brother Wonder had an experience that has totally changed his life and is now pointing him in a new direction.

“One Friday morning I was home when the spirit of the lord woke me up saying I am free,” he shared adding that further seeking God started the process of lyrics coming into his spirit, which resulted in a song.

Still amazed by what was happening to him he drove to New York from Connecticut where he lived and there he conversed with one of his church brothers sharing the call on his life to become a songwriter/gospel deejay.

Since then Brother Wonder said he has been constantly receiving lyrics under the inspiration from God and now he has penned about 15 songs.
Brother Wonder will soon release his first single entitled Dem Cyaa Stop Mi Blessings and it could be a prophecy on what the Lord has revealed to him – that he will be doing great things.

While that truth still boggles his mind – thinking about his humble beginnings – a poor youth from Bethan in Mile Gully, Manchester, growing up having to make do, as his mother and grandmother tried their best.

Brother Wonder said he sought God asking how, he would make him great and then it became clear as one lyric after another started dropping in his spirit.

“I never knew how to write lyrics, deejay or ride a rhythm,” he confessed sharing that God his relationship with the Lord has been opening up a world of opportunities for him.

Brother Wonder has already ruled out going back to selecting as he said shortly after getting baptized he tried it and God took that away from him…he is more certain than ever on the new direction his life should take and convinced that the Lord has bigger things in store for him.

As he looks forward to the new and exciting journey of being a gospel artiste, Brother Wonder has one wish and it is that his song will reverberate into the hearts and souls of those who listen.

Brother Wonder, who is a past student of Bethany All Age and Holmwood Technical High School, migrated in 1994.

Looking forward to his first single release he said the inspiration for it came one Sunday evening while taking dinner to a cancer patient.

“I wrote it literally in 10 minutes and started to study it,” he said sharing that a good friend of his foundation artiste Papa Biggy, whom he describes as a tower of strength assisted in producing the song for him on the Triple K Force label with Zojack set to distribute it on several platforms.

He said the song has a lot of scriptures and themes form the Bible and he is hoping it will be the trigger for God to reach out to the hearts of the bad man crew.

Brother Wonder says his desire is to keep producing songs that will make a difference in young persons lives. 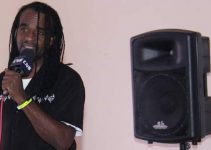