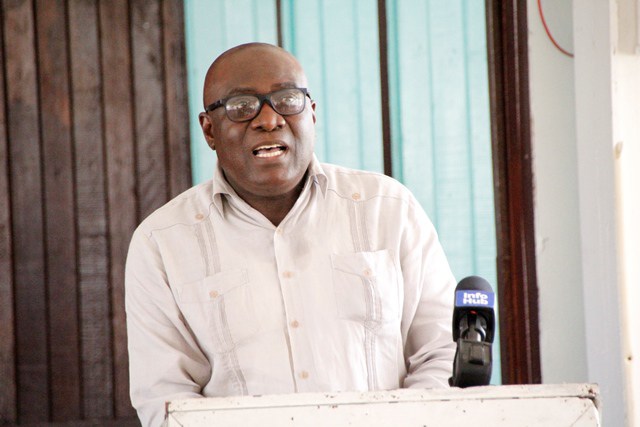 Guyana’s Ministry of Education said on Monday it will be galvanizing the support of retired teachers and students of the Cyril Potter College of Education (CPCE) to fall into place in the event the strike action of the Guyana Teacher’s Union (GTU) continues into the commencement of the new school term on September 3.

Addressing parents and teachers in Regions Five and Six today, Chief Education Officer (CEO), Marcel Hutson said the contingency plan by the ministry will ensure that the strike action by the GTU has minimal impact on the students. According to the CEO, there are currently 204 continuing students, 98 prospective graduates and a number of final year students at the CPCE. Those, he said, will be utilised by the ministry to fill the gap if the need arises. There are also monitors, coordinators and retired teachers that “we will be tapping into” along with the parents to assist in the process, the CEO disclosed.

Hutson assured parents that they need not worry about the affairs of their children should the GTU maintain its position on industrial action.

The ministry is on a nationwide campaign to reach out to parents and teachers, recommitting the government’s steadfast support to the education sector in the face of the current circumstance.

Education Minister, Nicolette Henry reminded the teachers and parents of the talks that the ministry has had with the GTU during this month to come to an agreement. She noted that out of the eight proposals put forward by the union, seven of them were either partially or fully addressed.

The minister stressed the importance of education and said schools will be opened on September 3 and urged parents to send their children out to school.

The minister said Guyana must win the war against illiteracy, noting that this will only be done if children attend school and benefit from the education system.

In his “My Turn” Column, the Prime Minister stated that he is “proud to be a member of an administration that has responded with genuine humanitarian concerns” when the Venezuela migrants began to cross the border.

Prime Minister Nagamootoo criticised Opposition Leader, Baharat Jagdeo’s objection to the temporary settlement of Venezuelans fleeing the economic crisis in the neighbouring country, into Guyana’s border regions. The Prime Minister noted that the admission of these migrants is being done on compassionate grounds.

He reminded that when Guyanese migrated they were accommodated and welcomed in the territories they entered. In this regard, the PM noted that being kind to others experiencing economic hardships is a “small token” for the kindness shown to us by others.

The Prime Minister recalled Minister of Citizenship Winston Felix’s recent visits to the country’s border areas as well as visits made by the Ministers of Public Health and Indigenous Peoples’ Affairs. “Prompt assistance” was given and “safe sanctuaries provided.”

According to the Prime Minister, a documentation/recording system has been implemented in order to register and keep track of the number of migrants entering Guyana at the border regions.