DPI, Guyana, Thursday, August 2, 2018, Two representatives of the Caribbean Community Climate Change Centre (CCCCC) are in Guyana to conduct a fact-finding mission for the preparation of a regional programme titled “Enhancing Coastal Protection for Climate Change Resilience” with focus on building capacity for mangrove protection.

The OCC, as the Secretariat of the National Designated Authority (NDA), is assisting the representatives by providing critical information and pointing them to key personnel to facilitate their study.

Several stakeholder engagements and meetings with key agencies including the Mangrove Unit of the Ministry of Agriculture, the Hydrometeorological Office, the Civil Defence Commission (CDC) as well as members of civil society and academia are being conducted.

A site visit is slated for Friday at the National Agricultural Research and Extension Institute (NAREI).

These engagements are expected to determine the requirements based on the country’s specific needs to craft the funding proposal for the regional programme, which would then be submitted to the Green Climate Fund (GCF).

According to Donneil Cain, an important aspect of the project is geared towards building climate resilience in communities and the expectation is to identify projects Guyana would want to initiate through the Enhancing Direct Access (EDA) project.

Under the EDA project, the Green Climate Fund (GCF) has allocated $4Billion or $20Million US for each project, with a total of 10 projects catered for. The money is on a grant to national agencies across the region.

Cain said six countries are part of the project including Guyana. Non-Government Organisations (NGOs) and government agencies stand to benefit.

“It is not only geared towards coastal protection in terms of mangrove but also farming activities that are along the Coast…but what we are here for is to really determine what the priorities of Guyana are and what are some of the potential projects that could benefit under this facility,” Cain noted.

Gender and the needs of the Indigenous People are critical to the articulating of the “country-driven” project “and so we are taking a bottom-up approach for developing the finding proposal for submission to the GCF,” he added.

There are several aspects of the project, however, integral to the process is information on the needs of each of the six countries to aid in the project’s implementation.

Specific target groups will be identified with assistance from the OCC for engagement by the CCCCC to allow for a well-designed plan. 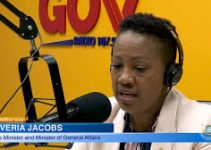