A jacaranda tree symbolising the ties which Barbados holds with Argentina, and honouring the work of that country’s outgoing Ambassador, Gustavo Martinez Pandiani, was planted today in the National Botanical Gardens, Waterford Bottom.

Minister of the Environment and National Beautification, Adrian Forde, planted the tree alongside Pandiani, and acknowledged the latter’s tenure and contribution, stating that the relationship built between Argentina and Barbados over the last three years would be a part of Pandiani’s “DNA”.

“I want you to recognise that the people of Barbados, in simple Bajan terms, ‘love you’,” he said, acknowledging that this was attributed to the envoy’s personality, contributions and relationships he had built.

Minister Forde pointed out that Argentina had shared relationships with Barbados “for the better part of 52 years” and thanked Mr. Pandiani for promising to support the island’s efforts at the XXII Meeting of the Forum of Ministers of Environment of Latin America and the Caribbean, slated for January 18 to 19, 2021.

“We have common threats and as promised by your Minister of the Environment, we are going to work closely to ensure that the political declaration we make is one that resonates with not only Barbados and Argentina but the rest of Latin America and the Caribbean. I want to say to you that you have our firm commitment to cooperate in your venture as you try to mitigate and resist the vagaries of climate change,” the Minister declared.

He further thanked the outgoing Ambassador for aid given in the form of over 10,000 kits, during the COVID-19 pandemic, even as Argentina was plagued by the illness; for helping Barbados with its football, as well as its Blue-Green initiative in the schools, among other things.

Pandiani, referring to the National Botanical Gardens as “probably one of the most beautiful projects Barbados has”, expressed the hope that the Ministry would see further advancements with the initiative.

Pointing out that the jacaranda tree was the national tree of his country, he said: “I am really happy that you were kind enough to select this tree because of the meaning it has for me as a citizen of Argentina.”

Assuring the Minister that his tenure as a diplomat and an ambassador was one he would not forget, he said: “I will be, in the next 10 years, thinking about my loving time in the beautiful rock they call Barbados.” 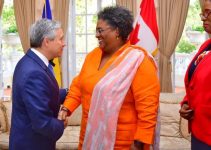