When Jhonelle Knight of St. Jude’s Primary School in St. Andrew heard that the grade-six Primary Exit Profile (PEP) Performance Task and Curriculum-based Test would be cancelled due to the coronavirus (COVID-19) pandemic, she was worried.

Her worry stemmed from what she thought was a major error she had made in the Ability Test in February that might prevent her from getting into one of her schools of choice.

With the cancellation of the other PEP components, and the decision by the Government to use the grade-five Performance Task in 2019, along with the grade-four literacy and numeracy test in 2018 to place students at high school, Jhonelle felt that she would not have had the opportunity to make up for her error.

But the 12-year-old from Waltham Park need not have fretted, as when the PEP results were released on June 26, not only did she turn out to be the top performer at St. Jude’s Primary but she was placed at first-choice institution, Immaculate Conception High School.

“I feel really good because I know that a lot of hard work went into it and the hard work paid off,” she adds.

Jhonelle says she never expected to be the top student from her school, although she had worked towards getting the required scores to earn a place at the prestigious all-girl institution.

She tells JIS News that she is looking ahead to the next five years of high school. “I’m looking forward to more challenges, a new level and more experiences,” she notes.

Jhonelle’s grandmother, Nadia Cushnie, who is a retired teacher from Balmagie Primary School, says that she too was concerned, given Jhonelle’s reaction after the ability test.

“She was a little disappointed because she said that after coming out of the exam, a question that they asked, persons were saying that she gave the wrong answer… and she didn’t want to discuss the exam anymore. So I was feeling a little down, I was thinking, ‘My gosh, maybe she didn’t do well’, but she actually got 100,” she notes.

Cushnie said that the road to success was not easy “but I’m always there with her, seeing that she does what she has to do and give her the necessary support; providing the necessary things that she needs for school”.

“With the exam being new, we didn’t know what to expect, but when I heard that they were going to use the numeracy and the grade-five grades, I felt a bit of confidence, because I knew that she scored perfect in grade four [and] in grade five she got three highly proficient and one proficient [score] so I knew that something [good] would have come,” she notes.

Cushnie tells says that Jhonelle’s parents, Joni-Ann Lawson and Brian Knight, were excited about her placement as well.

“Everybody is so elated… Her mother is very elated. Her father is abroad. He called to wish her all the best,” she says.

Principal of St. Jude’s Primary School, Susanna Ainsworth, is also happy about Jhonelle’s performance in the PEP exams and the school she was placed.

Her top performance was not a surprise, as Jhonelle has been excelling since she entered St. Jude’s Primary School in grade one.

In fact, she has been the top student at her grade level over the last five of her six years at St. Jude’s, Ainsworth notes.

Describing Jhonelle as a person of integrity with “inborn leadership qualities’, the Principal notes that in grade six, Jhonelle was elected head girl “and she did not just win and relax, she worked and tried to fulfil all her promises”.

“I remember when the children were to play the third round in Junior Schools Challenge Quiz and she fell ill. She insisted that as captain she had to play, but fate would not have her play as she was hospitalised,” she notes. 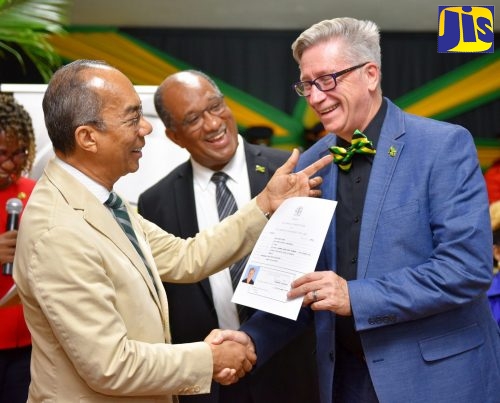