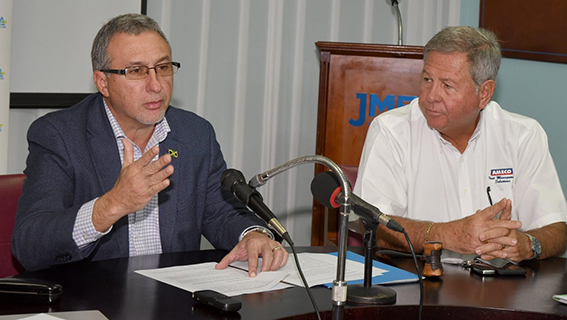 “Jamaica and our region remain untapped markets, as can be seen on the local and regional shelves. We recently learned at COTED (Council for Trade and Economic Development) that by October 2019, Haiti will put in place the administrative and legislative framework for duty-free trading of goods,” the President said, at the JMEA’s quarterly press briefing in downtown Kingston on Tuesday (November 20).

“This is an opportunity that must not pass us. Haiti is a big market that’s right next door to us. We must use this opportunity as business people, as manufacturers, to get in there early and start to sell our goods and services,” Seaga said.

In addition to this, the President reiterated that Jamaica’s economy showed some signs of improvement in 2018.

“We have been through a year where confidence has been restored. The nation is on a path of economic recovery, and employment has been on the rise,” Seaga said.

“Jamaica is already on the right path to exponential export growth; however, there is much work to be done. The country’s total exports of goods were recorded at approximately US$1.3 billion in 2017, 12.46 per cent more than the previous year and the highest it has been since 2008. While this is a commendable feat, it is still a far cry from the National Export Strategy II (NES II) target of $2.5 billion by 2019,” he added.

Seaga also noted that the JMEA made strides in securing two locations: Hayes and Torrington, through the Factories Corporation of Jamaica (FCJ) on a concessionary basis for the productive sector.

“Even though it took us almost one year, we are pleased to report that we have facilitated one company securing 20,000 square feet at Hayes,” he said.