Farmers from St. Elizabeth and St. Catherine have signed contracts with the Chief Executive Officer of Home Grown Produce Limited, Damion Young, to supply them with the red peas they will be planting, so as to increase local output.

The signing took place at the launch of the Red Peas Industry Programme, in Spaldings, Clarendon, on November 1, by Minister without Portfolio in the Ministry of Industry, Commerce, Agriculture and Fisheries, Hon. J. C. Hutchinson.

Hutchinson also presented farmers from Burnt Ground, in St. Elizabeth, with 30 bags of fertilizer in a bid to encourage them to plant more red peas.

This comes against the background that recent data from the Ministry shows that in 2017, a total of 7,247 tonnes of red peas, valued at US$7.2 million, were imported, and in 2018, some 7,642 tonnes, valued at US$8.2 million, were imported, representing an increase of 395 tonnes over the previous year and an increase of US$1 million being spent on the importation of red peas.

In his address, Hutchinson said there is money to be made by farmers who plant red peas,  because the local demand is high.
“We can grow red peas profitably right here in Jamaica. We import most of our red peas from a neighbouring CARICOM territory  and my response is that if they can grow it there, we can grow it here,” he told the farmers in attendance.

The Minister said it is obvious that Jamaicans love and consume a lot of red peas, and the farmers who have signed contracts to produce more red peas must be consistent in their production of the crop.

“This initiative that you have embarked on to resuscitate and increase production of red peas is therefore to be lauded, and you have the full support of the Ministry to strengthen your prospects in achieving your desired goal,” Mr. Hutchinson said.

He told the farmers that currently, red peas is imported to be eaten and cannot be grown here, but Government is looking at different varieties that are suitable for planting in Jamaica.

“We will be sending a technical team to one of the countries that supply it, to ensure that the ones we import are suitable to our climate in Jamaica,” the Minister said.

He noted that red peas can be inter-cropped with one of the Ministry’s priority crops, like Irish  potato. Through its Import Substitution Programme and the National Irish Potato Programme, the country has moved local production of the tuber from 30 per cent in 2008 to 90 per cent in recent years. 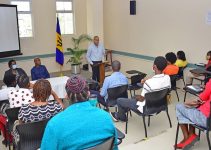