Neikoy, who started undergraduate studies at the University of the West Indies (UWI) Mona Campus on Monday (September 2), will receive $150,000 annually over three years towards his education.

The 19-year-old Campion College graduate earned an impressive eight grade ones in this year’s Caribbean Secondary Education Certificate (CSEC) examinations in additional mathematics, economics, biology, chemistry, physics, information technology, Spanish, and English A, and a grade two in English B.

Additionally, he got four grade ones in the Caribbean Advanced Proficiency Examinations (CAPE) in pure mathematics, economics, chemistry and communication studies.

In an interview with the government news agency JIS, the young scholar, who describes himself as goal-oriented, attributes his successes to hard work and discipline.

“I would say I am goal-oriented, because I feel it is always better if you set a goal for yourself and you are working towards that… . I think that I am quite disciplined as well,” he says.

Success has been the hallmark of Neikoy’s educational journey starting at Marlie Mount Primary in St. Catherine, where, in addition to being a high achiever, he was head boy, class monitor and prefect.

This continued at Campion where he served as student council representative in both years of sixth form and was appointed to the post of prefect in upper sixth form.

Neikoy tells JIS News that his desire for success extends beyond his personal ambitions. As the older brother to a doting six-year-old sister, he says he strives to be a positive role model for his sibling.

“I want to set a high standard for her. Now she goes to my alma mater, Marlie Mount Primary… and she’s trying to live up to the standard I set, and that is something I am quite proud of,” he says.

Neikoy tells JIS News that he is looking forward to his academic journey at UWI, where he is pursuing actuarial science.

He says he had always had an affinity for mathematics and economics in high school and feels that actuarial science is a good blend of both subjects.

He notes that, ultimately, he wants to open a financial consultancy where he can hire other professionals.

“I would like to open my own business and I think a lot of Jamaicans should be looking to do that now, because not only should you want to occupy a job, you should seek to create jobs in our economy right now. We need more businesses to develop the country,” he argues.

Neikoy credits his parents for being his constant support and guide.

“They are always very supportive and I could not say that I have had to do it alone. They have always been there for me and that is something I truly appreciate.”

“My father would show me maths when I was younger and I was very interested in it. He would show me things that were above my grade level that I wouldn’t be learning for another two or three years and I would catch on, so he encouraged me along that line,” he recounts, noting that his mother encouraged his interest in economics. 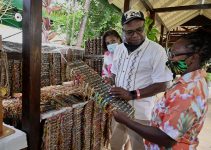