New investments in Jamaica, through the Special Economic Zone (SEZ) regime, are projected to exceed US$3.1 billion.

This was noted by Minister without Portfolio in the Ministry of Economic Growth and Job Creation, Hon. Daryl Vaz, who further said that new and expanded SEZ space is also projected to increase to 1.5 million square feet.

The Minister was making his contribution to the 2020/21 Sectoral Debate in the House of Representatives on Tuesday (June 23).

Mr. Vaz said the Jamaica Special Economic Zone Authority (JSEZA), which is responsible for regulating and supervising SEZs, continues the push to heighten stakeholder interest to catalyse further diversification in the sector.

“The progress that has been made in the development of a modern SEZ regime to replace the previous free zone arrangement demonstrates the Government’s commitment to build a competitive business environment and support growth-inducing economic activities that stimulate sustainable economic growth and development,” he said.

Mr. Vaz said the JSEZA reports that there are approximately 168 entities operating in the country’s SEZs, with a total investment of more than US$1.4 billion.

In addition, since the Special Economic Zone Act was passed in 2016, it has successfully transitioned more than 106 entities from free zones to SEZs, and to date, the JSEZA has received and processed 62 applications for new investments in the SEZ regime.

“The free zone investments grandfathered in the SEZ regime are estimated to total US$463 million, with employment for transitioned free zone entities exceeding 25,000,” he said.

An SEZ creates a specifically delineated location that is governed separately by the customs and tax regimes of the country and is intended to provide targeted incentives and services to encourage investments in Jamaica’s logistics-based industries. 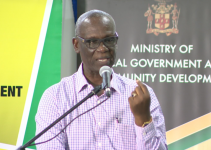