The National Water Commission, NWC, is seeking to assure its customers that they won’t experience extended periods without the commodity as many Jamaicans did last year. The NWC yesterday announced that it’s implementing a new round of water restrictions, due to concerns over limited inflows to its storage facilities. President and CEO of the NWC, Mark Barnett, says the company is working to repair and replace its remaining faulty systems.

“Once we are able to have those major transmission mains functioning continuously which was the case last year they were not up and running consistently. We are not expecting top see the long period of disruption, in fact we are more likely to se a better scheduling of the resource if it do come down to where we have to do different areas at different times. We are not envisioning a situation as we had last year.” Mr Barnett explained. He says the entity’s storage systems are in better shape this year in comparison to 2019.

“When we started last year January 2019 we were just at about 58 percent at Hermitage and 64% at Mona, and that was January 31, 2019. January 31 2020 we are at 89 percent Hermitage 81% Mona.” He continued to explain. The NWC says several customers won’t have access to the commodity during the nights. But, Mr Barnett says the NWC could intensify the restrictions if the drought conditions worsen.

“If things continue in that trajectory then we may have to intensify that restriction in the coming weeks” warned Barnett. Mark Barnett, President and CEO of the National Water Commission, speaking live on Nationwide recently. 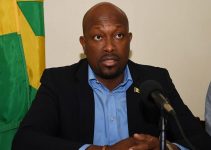