Naomi Osaka, the world number one in tennis made exited in the Madrid Open after losing in three sets in the quarter-final to unseeded Swiss Belinda Bencic on Thursday.

American Sloane Stephens has made her way in the semi-finals joining players Simona Halep, and Kiki Bertens who completed the final four line-ups.

In her post-match comments Osaka admitted to ‘overthinking’ about the need to win the match in order to retain her ranking at the top of the women’s game as she went down 3-6 6-2 7-5.

“People have been telling me that if I get to the semis I stay at number one so I wanted to do that. I wanted to do that and was thinking about it while I was playing, which wasn’t a good thing. I play my best when I’m calm and today I wasn’t, so that’s the biggest thing I can learn,” she said. 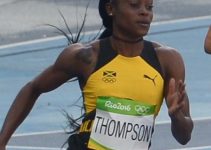