Menu
Home
Entertainment
Rapper Pop Smoke was shot at a Hollywood Hills home at about 4.30am Wednesday

The 20-year-old artist, whose real name is Bashar Barakah Jackson, was at a party at a home in Hollywood Hills when two men wearing hoods and masks broke in at around 4.30am local time, TMZ reported.

The suspects fired multiple shots, at least one of which struck Pop Smoke and left him critically injured.

The men then fled on foot and are still at large as of 7.45am.

It is unclear whether they’ve been identified by authorities or what their motive may have been in the shooting.

Fuck man not Pop smoke too. Despite the jokes he was a great versatile artist too like damn bruh pic.twitter.com/ce9E8trYQU

R.I.P to my man Pop Smoke, No sympathy for winners. 🕊God bless him pic.twitter.com/5ZFa5ILUzl

First responders with the Los Angeles Fire Department were filmed rolling Pop Smoke out of the home on a stretcher.

He was transported by ambulance to Cedars-Sinai Medical Center in West Hollywood, where he was pronounced dead.

One man was taken into custody immediately after the shooting but he was released after police determined he was not involved.

Pop Smoke, a rising star on the rap scene, released his debut mixtape Meet the Woo last summer. The lead single on that album, Welcome to the Party, reached number five on Billboard’s Bubbling Under Hot 100 Singles chart and was remixed by Nicki Minaj.

He also featured on the hit song Gatti with JackBoys and Travis Scott.
Minutes after news of the shooting broke, Minaj posted a photo of Pop Smoke on Instagram, writing: ‘The Bible tells us that jealousy is as cruel as the grave. Unbelievable. Rest in Peace, Pop.’

The Bible tells us that jealousy is as cruel as the grave. Unbelievable. Rest In Peace, Pop.

The cryptic caption suggests Pop Smoke may have known the suspects – but law enforcement sources have not said if they think there is a connection. 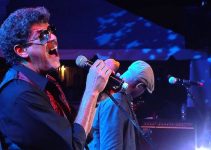