Police are probing the shooting of a cop, allegedly by a Jamaica Defence Force (JDF) corporal, in a reported love triangle in Greater Portmore, St Catherine, Jamaica Wednesday night. The shooting was confirmed by Senior Superintendent Stephanie Lindsay, the head of the Jamaica Constabulary Force’s Corporate Communications Unit.

“The soldier is not in custody, he was never in custody. He hasn’t been charged, as investigation are still ongoing,” Senior Superintendent of Police Stephanie Lindsay, the Communications Officer for the Jamaica Constabulary Force (JCF), told reporters.

Reports are that about 11.45 pm on Wednesday, the JDF corporal arrived home and caught the policeman in a compromising position with his wife.

The corporal reportedly pulled his licensed firearm, with which he gun-butted the cop on his forehead before shooting him in the left shoulder.

The woman involved is also a member of the Jamaica Constabulary Force.

The policeman managed to flee the scene leaving his firearm behind in the process, reports indicated

He has since been admitted in hospital and is in stable condition. 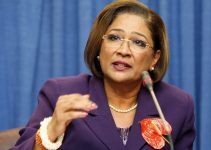