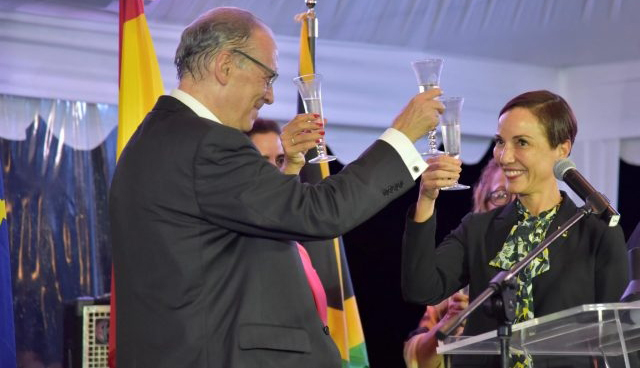 Speaking at Spain’s National Day reception, held on October 10 at the Ambassador of Spain’s residence in Kingston, the Minister said that Jamaica has been able to attract investments from six of the top-10 hotel chains from Spain.

“We particularly welcome Spain’s goal to introduce a “second wave” of Spanish investments that would go beyond the traditional areas of cooperation to include energy, logistics and the agricultural sectors,” Senator Johnson Smith added.

She said bilateral cooperation with Spain has been active this year, noting that she travelled to the country earlier this year for the signing of a Memorandum of Understanding on Political Consultations between the two countries.

“This seeks to advance our relations at the highest political and diplomatic levels, while strengthening our economic ties,” the Senator pointed out.

Senator Johnson Smith cited the tangible benefits derived from Spanish investments and noted the ongoing construction of the 190-megawatt power plant in Old Harbour Bay by the Spanish firm, TSK Group, which has created 239 local jobs, with 140 jobs being held by persons from the surrounding communities.

In the area of Spanish language education, she said that 105 teachers of Spanish recently benefited from an intensive four-day training programme by the Cervantes Institute, Spain’s flagship institution, in the teaching of Spanish.

“We are truly grateful for Spain’s continued support as we strive to implement policies that will lead to the people of Jamaica being better positioned to capitalise on the opportunities present in today’s global marketplace,” she said.

The event, hosted by the Spanish Ambassador to Jamaica, His Excellency Josep Bosch and his wife, Teresa Gonzalez de Bosch, was attended by Ministers of Government, members of the diplomatic corps, senior government officials and staff of the Embassy of Spain.

Ambassador Bosch said that his Government will continue in its efforts “to create a more bilingual Jamaica”.

“We are beginning to deliver with a tight collaboration with the Ministry of Education. From this September, we have two Spanish lecturers, one in Shortwood Teachers’ College and another at Sam Sharpe (Teachers’ College),” he added.

He said the Embassy of Spain will continue to assist with Spanish language training for teachers and hotel workers.

Last year, the institute organised Spanish introductory courses for hotel staff with the support of the Ministry of Tourism.