Three of four young males seen brandishing a gun in a viral video are now in police custody.

In a news release Friday morning, the corporate communications arm of the Jamaica Constabulary Force said “quick action” by detectives from the Kingston Eastern Division led to the identification and arrest of the three suspects.

Two of the young men, whose names cannot be released because they are minors, are currently at the Metcalfe Street Juvenile Centre, while 20-year-old Deson Berry of Rollington Town, Kingston 2 was handed over to the Rollington Town Police by relatives, following a police operation in the community.

A fourth individual seen in the video is still being sought, and is also wanted by the police for breaching the conditions of his bail in a matter that is before the court.

The police are asking anyone with information on his whereabouts to contact the Elletson Road Police at 876-928-1261, Crime Stop at 311, Police 119 emergency number or the nearest police station. 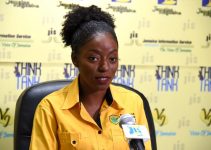