The TikTok which has an estimated 80 million users in the United States could be a thing of the past if US president, Donald Trump gets his way.

Trump on Friday said they would be banning the app from the United States, stating that he could use emergency economic powers or an executive order to enforce the action the next day (August 1).

The announcement prompted users on the platform to make quick videos asking their viewers to follow them instead on Instagram. There however, has not been any official announcement that the ban is in effect.

TikTok permits users to create videos between 15 and 60 seconds, many of which rack up millions of views after circulating on Twitter. 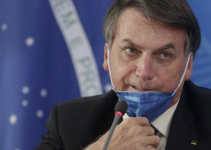